Death Cafe Toronto: A Space to Talk About Life and Death 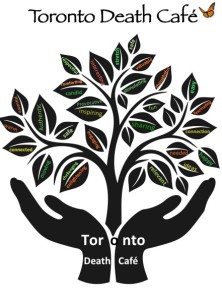 “Mom, you’re SO weird,” my youngest son announced when he heard of my plans to organize and host Toronto’s first Death Café.

At the time he was 20 and stared at me with big eyes and disbelief as if he pictured me dressed goth-style with ultra-pale skin and black lipstick.

“I don’t get it,” he said. “Why would you want to sit around and talk about death with complete strangers?”

I guess this meant he wasn’t going to come.

He was right though. It did sound bizarre. And I didn’t really know how to answer his question. All I knew was this: You know that warm, tingly feeling you get when you first intensely connect with someone and all you want to do is delve deeper? Well, that’s how I felt when I first heard about Death Café.

Death Café is a discussion group, not a grief or support group. Inspired by Bernard Crettaz’s “Café Mortel” in Switzerland, a Death Café provides a safe space to openly discuss one of life’s most significant moments.

“People want to talk about death and they want to do it on their terms,” says Jon Underwood, Death Café’s founder. “At Death Café, people have been having fantastic conversations about death.”

Really? Could talking about death actually be fantastic? Comforting, even? I wasn’t sure, but I was going to find out.

Twenty-eight participants gathered in small groups to discuss anything and everything to do with death. An eclectic mix of men, women, cultures, faiths, and ages ranging from 20-something to 70-something filled the room. With no formal guidelines (only a few etiquette tips), the groups were free to discuss whatever they desired. The discussions were as varied and unique as the individuals at each table.

Here’s the thing I wasn’t expecting: Laughter. LOTS of laughter. So much, in fact, that at times I couldn’t hear my tablemates.

And then it occurred to me. You can’t talk about death without talking about life. The real magic, I discovered, is that human beings connect on an incredibly deep level while having these types of intimate conversations.

Participants were asked to complete short surveys on their experience.
Here’s what some had to say:

Underwood was right. People really were having fantastic conversations at Death Café.

Twelve Death Cafes later, people still ask me “Why?” For me, Death Café is about embracing the time that I have. When I openly explore the reality that death is inevitable, it forces me look at what I want to do with this gift called Life.

I’m not an expert on death, but wouldn’t it be amazing if one day – maybe my last day – I could declare myself an expert on life?

Maybe someday, I’ll even convince my son to come.

Linda Stuart is a Life-Cycle Celebrant / Ceremony Officiant who specializes in funerals and is located in Toronto, Ontario.

Death Café serves up tea, cake and conversations about dying

Death, coffee and Bundt cakes: Death Cafes are safe places to talk about the afterlife

At Death Café: A life-affirming experience