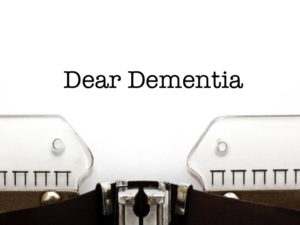 I have heard that writing a letter to someone who has died is helpful to the grief process and, while my mother is still very much alive, with every passing day, I mourn her loss. Over and over again, I am reminded, “It’s not her, it’s the disease.” And so, Dementia, I write this letter to you, for you have become and defined my mother.

We politely called you “Memory Problem” when we first became acquainted 30 years ago as you took over my grandmother’s life. And, for a while, that’s all you were: a slight inconvenience—a little frustrating, but nothing too dreadful. In fact, at times we thought your effects were quite humorous, like when we learned that my well-mannered grandmother had angrily chased my grandfather around their Glasgow flat with her cane. But it was only amusing for a moment. Then, the reality sunk in: this imposter was no longer my grandma. It was you, Dementia.

By your standards, my mother is only mildly afflicted by your barbarity: She still knows her family, can eat, dress, and converse. Well, sort of. Despite a bursting closet of clothes and accessories she used to love, every day she reaches for the same black stretchy pants and red crew neck sweater, lashing out in offence when we suggest it might be time for a change. Conversations are exhausting, both for her and us as she aimlessly wanders around the house looking for something and muttering incessantly, “I can’t remember.” Unkind words often leak from the proper British filter that once prevented her from spewing impolite thoughts. Last week, she asked me the date of my birthday. It’s Christmas Eve. You would think that would be hard to forget, but she did.

She is aware of your eerie presence, Dementia, particularly in the mornings, when she often wakes up crying. Frightened and confused, her ability to distinguish dreams from reality diminishes with every passing day. “I hate being like this—I hate who I have become,” she sobs like a distraught four-year-old who has just lost her treasured dolly. And then the worst happens: she pounds her head with her fist and calls herself a stupid bitch.

Because of you, I now question a truth that was ingrained in my being for all of my life: that I am a good daughter. Because a good daughter is patient—she doesn’t roll her eyes at her mother’s increasingly childish behavior. A good daughter is compassionate—she doesn’t resent her mother for burdening her father with an illness she cannot control. A good daughter can separate the disease from the person and does not retaliate when hurtful words are slung her way. “Don’t worry,” my father says calmly as he pats my hand, “she won’t remember tomorrow.” But I will.

Growing up, I always feared that my father would die too soon. Now, I fear that my mother will live too long. Too long to still giggle at her favourite sound of champagne being uncorked. Too long to know the difference between kind and cruel words. Too long to know that I am her daughter and that, despite our strained relationship, I love her.

I don’t know what to hope for because you, Dementia, will not go away, get better or slip into remission. And the horrific thought that one day you will wrap your genetic tentacles around my life, stealing my children, my memories, and my dignity cripples me with fear.

And that is your ugly truth Dementia. You take lives. You break hearts. You devastate families. And, hard as I try, I cannot find your silver lining.

Linda Stuart is a Life-Cycle Celebrant/Officiant and Speaker located in Toronto, Ontario. Specializing in funerals and weddings, Linda’s passion is bringing stories to life through meaningful ceremonies.

If you enjoyed this story, you may also like: Accepting the Season of Loss | Scotland: My Father’s Untold Stories | When I Die, Please Do Something