When I Die, Please Do Something 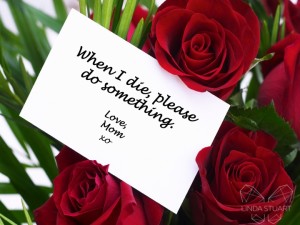 In her dresser drawer, they discovered a hand-written note that read, “When I die, please do nothing.”

She had just taken her last breath.

And so began the distressing dilemma that many families face: Honouring their loved-one’s request to do nothing or honouring their own desire to do something to mark their loved one’s life.

Anguished, my childhood school friend called me in a panic. “How can I do nothing?” she asked. For Judy, doing nothing was the equivalent of sending out a loud and clear message that her mother didn’t matter. That her mother wasn’t special. That her mother’s life was forgettable and not important.

I asked Judy to imagine her mother was still alive. Could she have a conversation with her mother now, knowing her final wish of “nothing”? I encouraged Judy to imagine telling her mother why it was so important that her daughter be given the opportunity to say goodbye, to receive support, to publicly declare her love, and to take the first of many steps towards healing her broken heart. Judy needed that important space to help her accept the harsh reality that she was now motherless.

Then I asked: “What would your mother say in response?”

Some people feel guilty when they’re made a fuss of. “I’m nothing special,” they think. “My family should spend their time and money doing something fun instead of crying over me.”

Judy’s family found a compromise: They hosted a visitation they believed that their mother would have agreed to had they had that conversation while she was alive. As a result, Judy received real hugs, not the virtual kind all over Facebook. Friends and family gathered to remember, support, and collectively grieve. Judy, along with her father and sister, listened to stories they had never heard and came to really comprehend the impact that their mother and wife had had on others.

The experience was so healing that Judy’s father, who also had a “do nothing” request, changed his mind and has taken steps to plan the details of his own funeral.

I will likely pre-plan my funeral one day. I’m only 54 so I think (hope) I still have time to take care of this task. But my final wishes will be based on what my family needs. As a Life-Cycle Celebrant, I also realize that they may not even know at this point what that is, so there will be lots of wiggle-room, space, and suggestions for creative rituals that will help them move through the stages of their personal grief.

I want them to make a fuss. Not out of some ego-driven need to be the center of attention, but because I know from my years of working with the grieving that a fuss is what’s necessary when we lose a loved one. I want red wine and pink roses and a chocolate buffet. I want my family to feel and hug and connect. I want an uplifting ceremony overflowing with tears and laughter and applause. I want them to look at me one last time as they simultaneously say goodbye and hello to their new life without me in it.

When I die, I want them to do something.

Linda Stuart is a Life-Cycle Celebrant/Ceremony Officiant and Speaker located in Toronto, Ontario. Specializing in funerals and weddings, Linda’s passion is bringing stories to life through meaningful ceremonies.

If you enjoyed this story, you may also like: Celebration of Life or Denial of Death? |  When Dust in the Wind Isn’t Enough | Stella Joy: Celebrating her Small but Mighty Life | Scotland: My Father’s Untold Stories